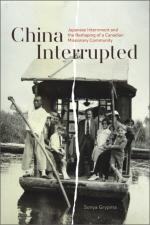 China Interrupted: Japanese Internment and the Reshaping of a Canadian Missionary Community

China Interrupted is the story of the richly interwoven lives of Canadian missionaries and their China-born children (mishkids), whose lives and mission were irreversibly altered by their internment as “enemy aliens” of Japan from 1941 to 1945.

Over three hundred Canadians were among the 13,000 civilians interned by the Japanese in China. China Interrupted explores the experiences of a small community of Canadian missionaries who worked in Japanese-occupied China and were profoundly affected by Canada’s entry into the Pacific War. It critically examines the fading years of the missionary movement, beginning with the perspective of Betty Gale and other mishkid nurses whose childhood socialization in China, decision to return during wartime, choice to stay in occupied regions against consular advice, and response to four years of internment reflect the resilience, fragility, and eventual demise of the China missions as a whole.

China Interrupted provides insight into the many ways in which health care efforts in wartime China extended out of the tight-knit missionary community that had been established there decades earlier. Urging readers past a thesis of missions as a tool of imperialism, it offers a more nuanced way of thinking about the relationships among people, institutions, and nations during one of the most important intercultural experiments in Canada’s history.

Sonya Grypma is a leading scholar in the history of nursing and global health and an associate professor of nursing at Trinity Western University. She has gained an international reputation for her work on missionary nursing in China, particularly through her groundbreaking book Healing Henan: Canadian Nurses at the North China Mission, 1888–1947.

For more information and to order see: http://www.wlupress.wlu.ca/Catalog/grypma.shtml