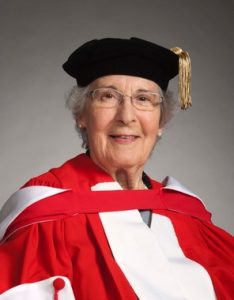 Dr. Shirley Marie Stinson, a visionary nursing leader and a founding member of the CAHN-ACHN, passed away on June 4th, 2020 at the age of 90. She was honoured for her rich contributions to multiple fields, including raising the profile of nurses in Canada, establishing Canadian graduate programs in nursing – including the first PhD program in nursing – and improving standards of patient care worldwide. Invested as an Officer in the Order of Canada in 2002, she also received the Province of Alberta’s highest award, the Alberta Order of Excellence, multiple honorary doctorates, the Canadian Centennial Medal, the Queen’s Golden Jubilee Medal, the Haultain Prize in Humanities, and the Canadian Nurses Foundation Ross Leadership Award, among a long list of honours and awards. As our Fall newsletter recounted, this past November, the University of Alberta honoured this great leader by holding the first Shirley Stinson Research Day to commemorate her commitment to nursing research.

Dr. Stinson was born in Saskatchewan, graduated in nursing from the University of Alberta, received her MA in nursing administration from the University of Michigan, and her PhD in education from Columbia University in 1969, after which she joined the faculty at the University of Alberta. Over her long career, she “taught, inspired, and mentored several generations of nurses and hospital administrators, from boomers to millennials, including many of today’s leaders in education and in nursing.” As a founding member of the CAHN-ACHN, she encouraged and helped to establish the field of nursing history in Canada. As a pioneer, a leader, a researcher, and a mentor, she will be greatly missed.